Here are some news of my wooden Ghettoblaster project...
In case you missed it, you can find here the first steps. I used marquetry techniques to give this ghettoblaster a retro look. I did not want to build yet another box with an amp and speakers (where would be the fun in that?).

I had old 3 way car speakers lying around. These are meant to be flush mounted. If you're familiar with building speakers, reading on might make you scream (you've been warned).

Googling around, I discovered a little of the science behind building speakers and lots of people arguing about technicalities (as always). I'm therefore not going to start a debate here...
here is an interesting source of information if you want to push your education about this topic a little further...


Here is (in very short) what I discovered about speakers: home audio is usually made of ported speakers where the driver (the thing producing sounds) is mounted in a box with a hole in it. If done right, it will sound great and will make your speaker much more efficient. It also requires more room (which is not a problem at home). Car audio speakers are however meant to be flush mounted either on the parcel shelf (large to infinite space called infinite baffle) or in very tight spaces such as car doors. These speakers ('drivers') are much more forgiving and should accept most box designs. I'm happy this is my case (car audio speakers) as I won't have (and don't want to) make all the calculations. This is as far as I'll go in this post and will go over audio in another one later.

Where I left it, my front panel wasn't ready to be assembled in a box just yet. I still had to add VU meters (real ones), make the grooves to flush mount the speakers (using a router, see pictures above) and add an rusted handle.

We're not going to talk about electronics here, we will focus on the physical integration of the VU meters I purchased from eBay.

These VU meters are cheap plastic Chinese meters I got are supposed to be flush mounted and need to be attached from underneath the wood. The result above is the trickiest part of this project (see how thin the wooden edges are?). To give you an idea, the whole thing is 4cm high (about 1.5 inch).

To build this I needed a thin board of oak (5mm). Since I had none, I used a thick one (14mm) and used my router to make it thinner once both holes for the VU meters were drilled. If you ever need to do that, you should stick your plank between two other pieces of wood in a vice before using your router to remove a layer of wood that way you can avoid touching your vice with the router. I then glued a lath of darker wood all around it and let it dry in the vice:

Once ready, I had to select and mark where to place my VU meters:


Remember: better make a smaller opening and enlarge it with a file than having to fill large gaps with little pieces of wood (or wood filler):


If you're like me ... it never fits the first time you try:


Filing is always a little tricky: Remember to make an angle (front face needs to be the largest) so it is easy to insert your piece of wood. Depending on your needs, you can file the insert, the opening or both:

The insert is glued and drying inside the opening of the front face:

Glueing VU meters: to do this I used only a little (hot) little glue so the VU meters can be removed if needed and leds can be added for backlight. Remember to put it on an even surface to have your meters at the same level as the front panel:

I want my wooden ghettoblaster to look good even at night and to be able to see the needles dancing as I'm blasting music around.

My first idea was to use bright white leds (in series with a resistor). Out of the three I had only two worked, they were cool white (therefore not so cool ;-) and they were a little bulky so I decided to use SMD leds from a broken (warm white) led bulb. I strongly recommend always keeping a broken led bulb handy, they're a gold mine for leds.

I unsoldered 8 of them in total to put two on each side of each meter. Since I had only a few resistors left I used only one and wired my leds in parallel ... which is not a good practice (no guarantee you get the same current in all leds) but does the job just fine when they're all the same model and only requires one resistor. Note that I rated my resistor for only one led so all led were underpowered but at least I'm not risking to have to replace them after they're (hot) glued to the VU meters :-)

And voilà, we've got two nice VU meters with a warm white backlight.

I'll have a limited number of controls:
Since the volume control is the only one coming with a real challenge, we'll focus on that one.

I started by inserting my 'The Crunch' amplifier (from 1992 !) in the box to find the precise place where I'll have to drill the hole for the volume control shaft.


I then made a shaft extension for the volume potentiometer by cutting a wall plug and a threadbar:
I then cut it to the appropriate length and added a couple of bolts to prevent it from sliding out: 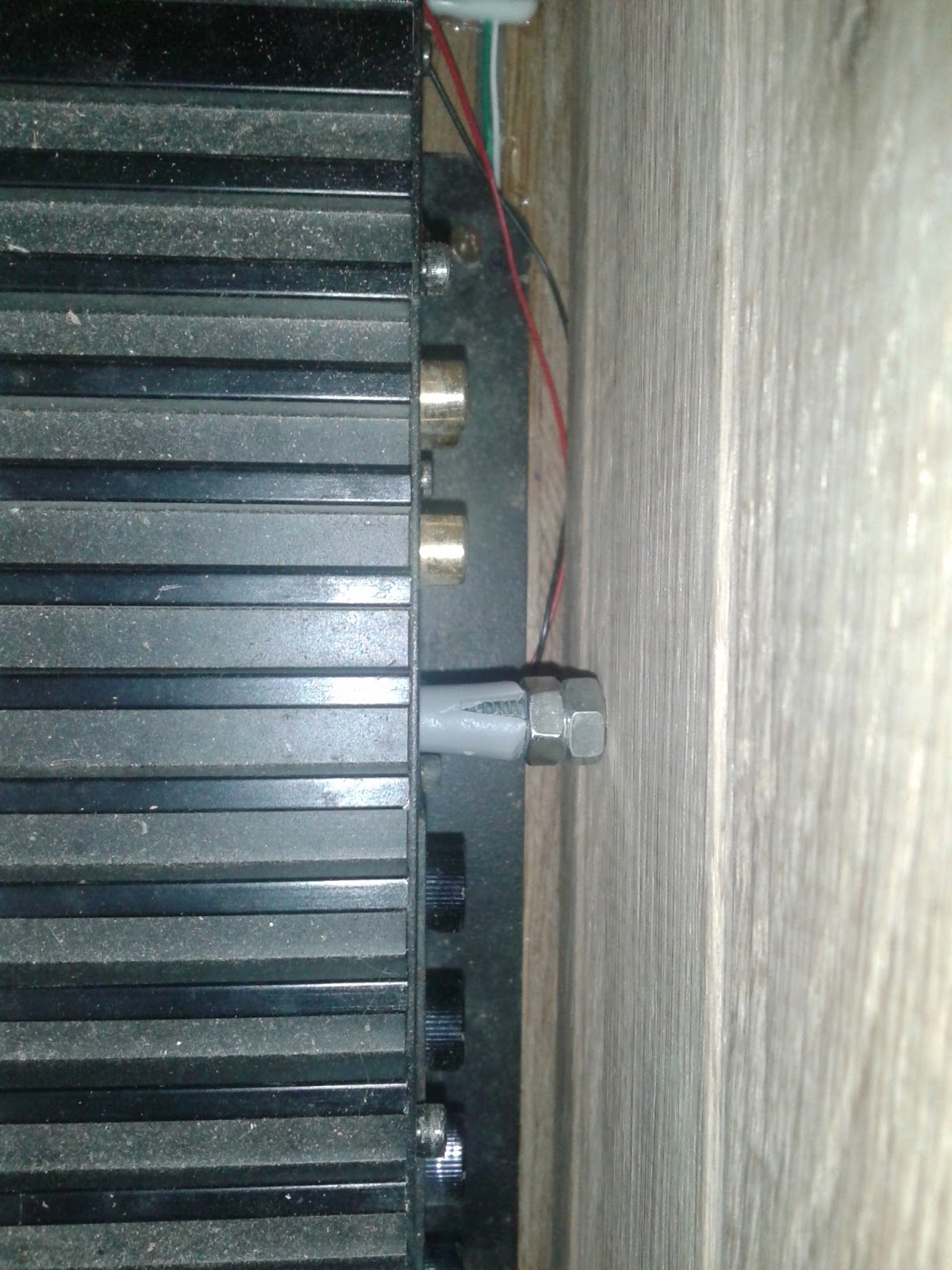 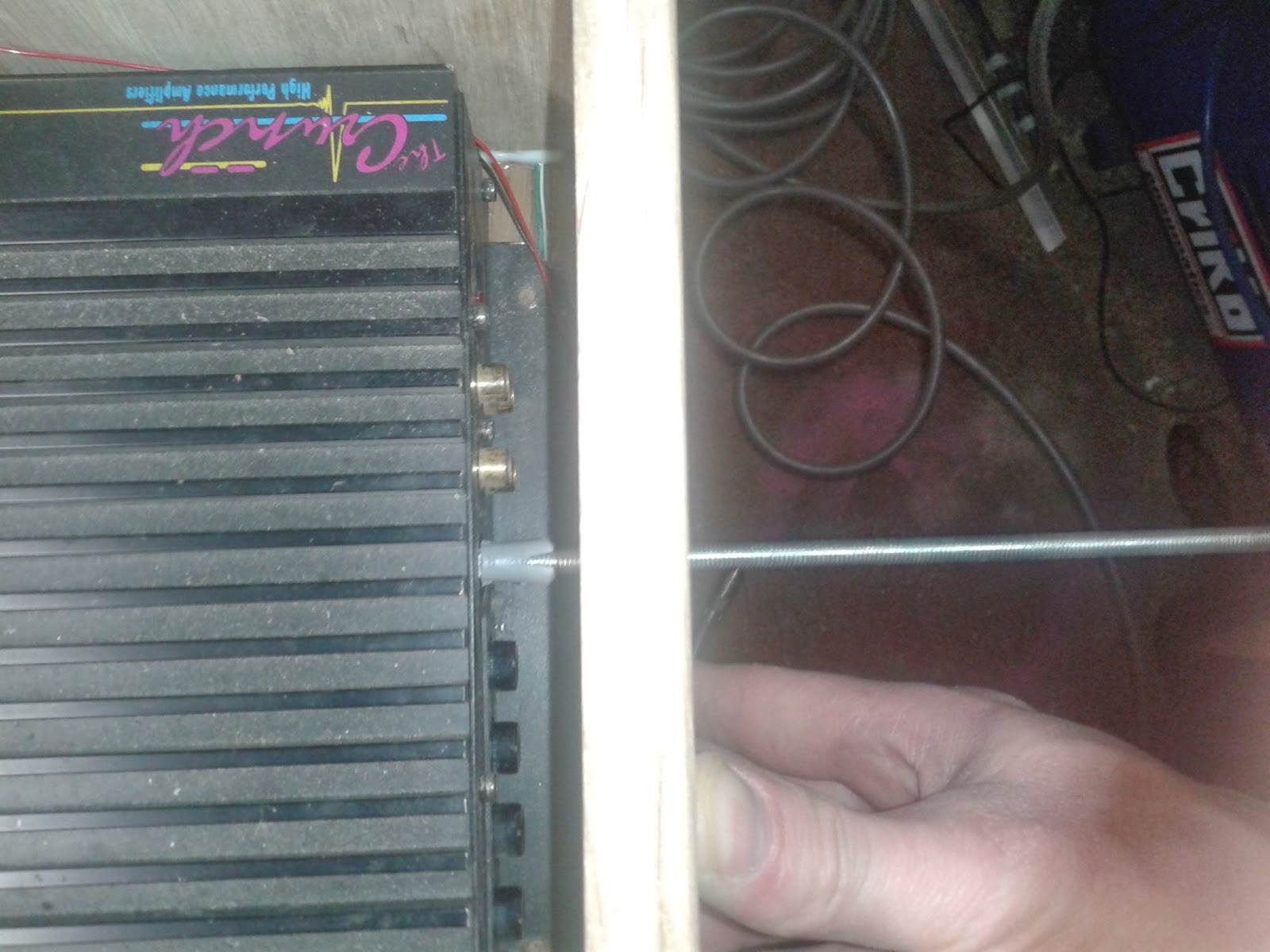 The wooden ghettoblaster (box) with its volume control (I added the speakers for the photo):

Adding a handle is not as easy as it seems... you need to combine both metal and woodworking techniques and need to be precise with both.

This part is straightforward but needs precision. You need to cut your tube at a perfect 45° angle... and I always manage to screw that up but eventually always file my way through it (this is annoying to get the correct length). The pictures below are before and after: 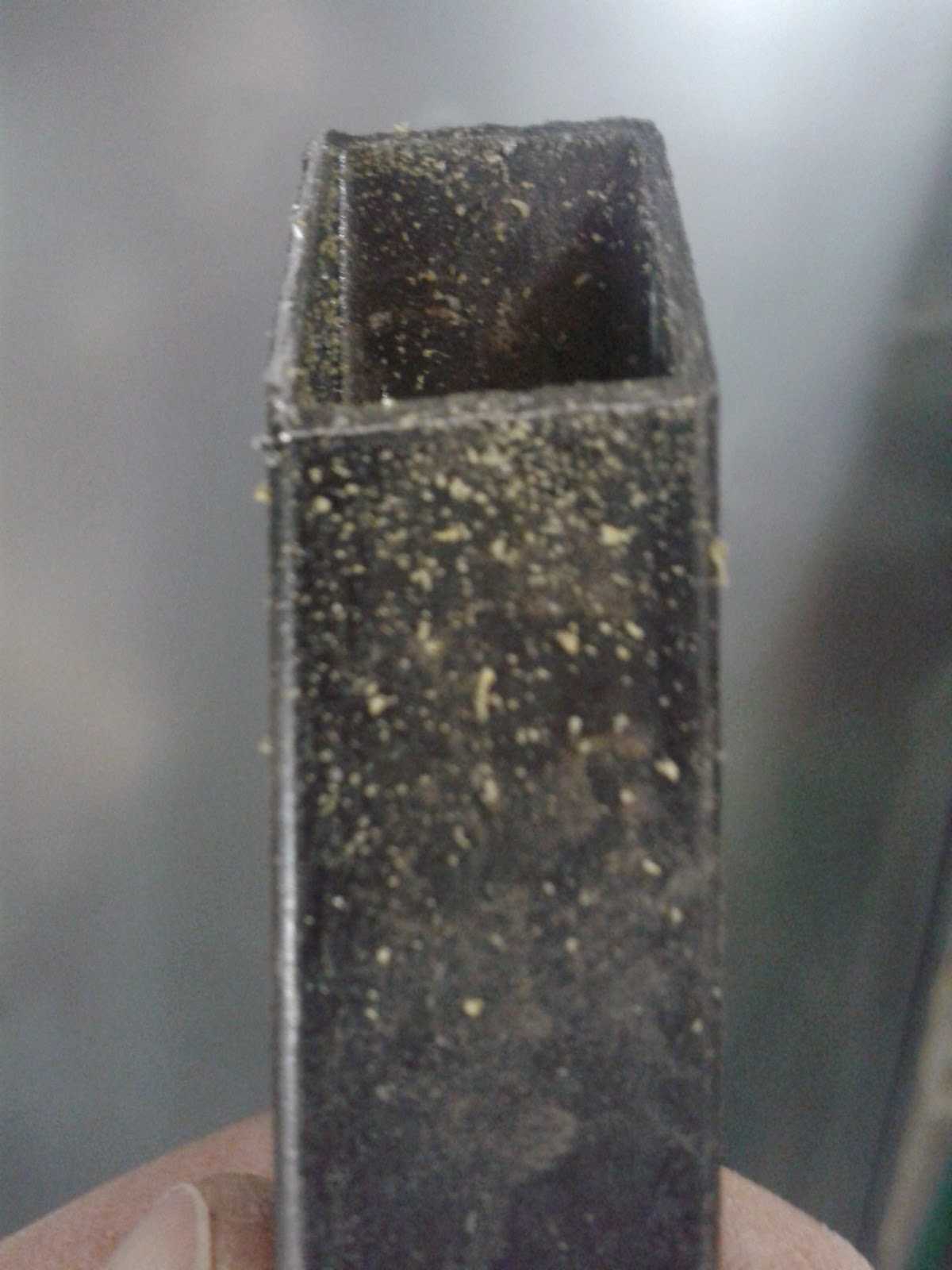 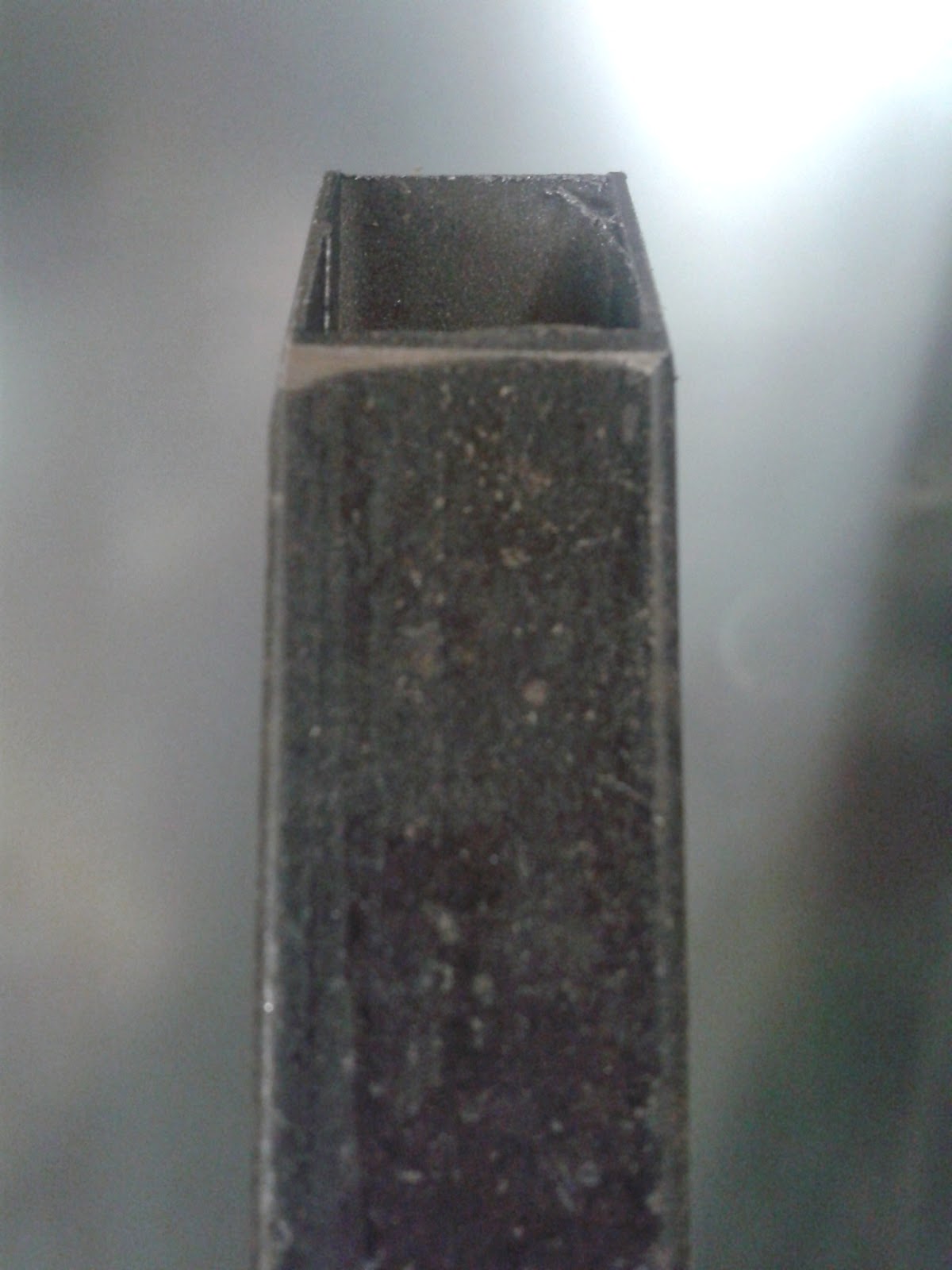 I then clamped the tubes to a set of (white) bars I had lying around to make sure my angles were square and I had the exact same length as my boombox. 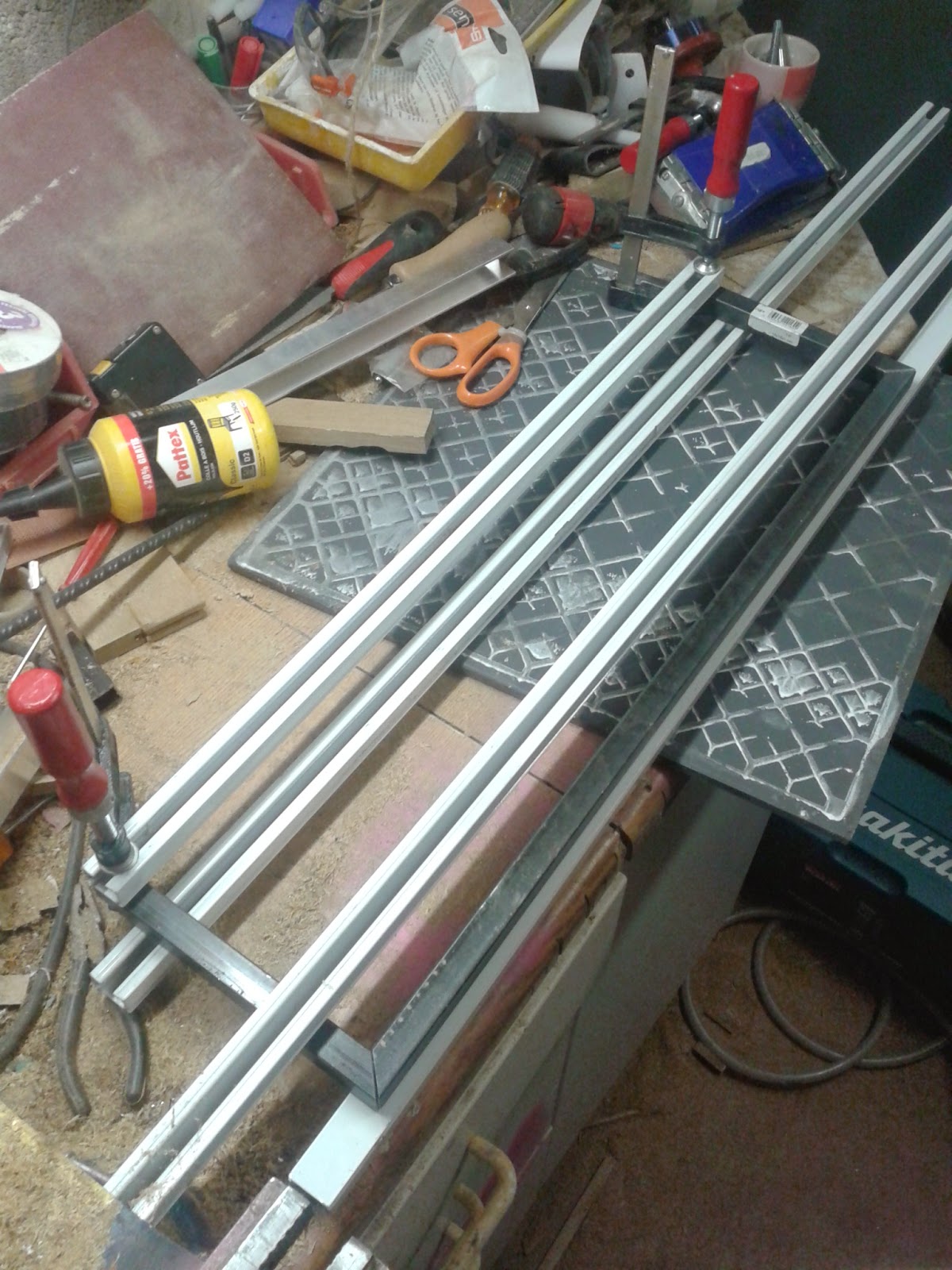 Taking pictures while soldering is difficult so I didn't do it: you'll have to believe me when I say I did it myself ;-) I however managed to make holes in my handle  by accident. This happens when you're terrible at soldering (which is my case). Anyway it does not matter since I want it to be imperfect and rusted.

To let it rust, I had to remove all the coating it with a metallic brush

Adding a groove to the sides to insert the handle

I'm taking a shortcut here and skip the part where I build the box, there's nothing special there. We're going to add the handle and to do that I'll make 10m long grooves on each side with my router to slide the handle in.
And made the groove:

A couple of chisel strokes, a little filing and sanding later and voilà:


The handle is secured with two stainless steel (hum...) screws on each side.

You can read my following posts where I take care of the audio and electric parts as well as paint these speakers (fake rust, ongoing).